A Navajo concept to live by…

Posted on September 5, 2019 by sheilawill

I’m back home in Tucson, following two weeks back east on magnificent Mt. Desert Island, Maine, and nearly a week in cool Minneapolis visiting my son and his beautiful family. We’re awaiting the birth of their daughter. Meanwhile, my super adorable and super verbal nearly three-year-old grandson delighted me nonstop.

Foss hanging out with the bunnies at the Minnesota State Fair

On my one day alone, strolling alone around the Minneapolis Institute of Art, I encountered a Navajo concept new to me. The experience awakened something. Never before had I felt the urge to create art. 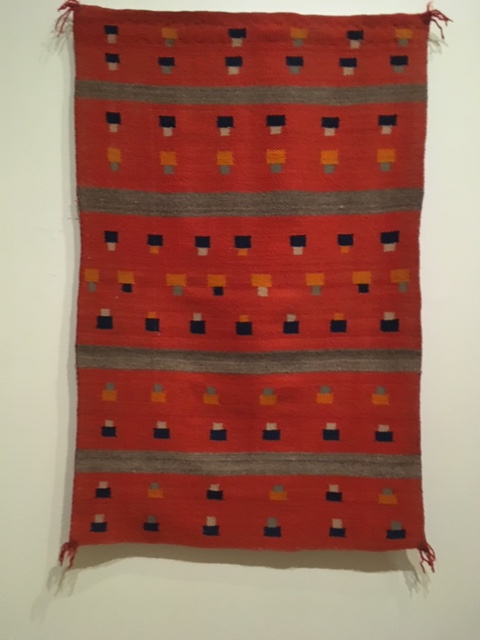 So intriguing, this is canvas, again at the Minneapolis Institute of Art.

Art inspires me but words carry me everywhere.

On my 5 a.m. Lyft ride to the Minneapolis airport yesterday, my driver regaled me the entire way with her son’s paternity issues. He may be the father of four kids, but there was that time they found his girlfriend in bed with another man.

“Forget about your clothes,” she told the guy as he scurried naked past her, pulling his boxers up. “My son is coming after you with a hammer. Run!

“I made him get a paternity test,” she said.

In a way, I would have rather not heard this saga, but it stays with me. Part of my driver’s story portrayed her brother in the same position, fathering four kids, one of whom may not be his. My driver was sanguine about it all. “So what, he’s taken care of all four since birth so he’s their father.” (she may have felt more insistence about her son’s parental responsibility).

I’m so inspired by my son and daughter-in-law’s superb, joyful parenting.

Me, I’m a grandmother enchanted by balance, grace, health, and happiness wherever I  can find it. Hozho is a beautiful concept to live by.