My darling, delightful grandson, Foss, was born on Jan. 21, 2017, the day of the imposter president’s Inauguration. Nothing curtailed our family’s happiness. But it was too bad that horrible historical anomaly overlapped with our glorious family occasion. 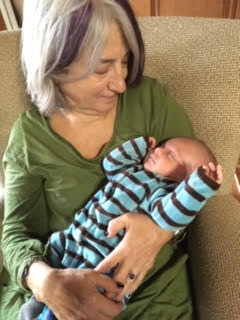 This Saturday, Sept. 28, my son and daughter-in-law will welcome their baby daughter. We hope the imposter president is finally on his way out.

Soon to be four, when baby girl arrives Sept. 28!

Lurking in the background will be the possibility of accountability — finally — for this lying, crooked, mean-spirited, racist, very sick individual, and incompetent Mafia family now mistakenly sitting in the White House.

I’ve been supporting his impeachment for months, regardless of Speaker Nancy Pelosi’s hesitation and newspaper opinion pieces stating it would be a bad idea. It could make him more popular prior to the election if more Independents and Republicans feel sorry for him. I don’t think this will happen.

Here are some reasons why Impeachment is the way to go:

Cleansing my system prepares me to fly to Minneapolis tomorrow, focusing on the beauty of life and love!

Like Loading...
This entry was posted in Family Matters, Fight wimpiness, For Love of History, Politics and tagged Elizabeth Warren, high crimes and misdemeanors, Impeachment, joy of being a grandmother, Nancy Pelosi, U.S. Constitution, Ukraine debacle. Bookmark the permalink.