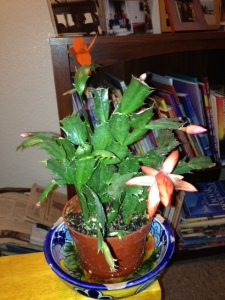 Life keeps turning. But there’s still so much I don’t know. Why does this Christmas cactus bloom at the same time every year?

Where do our memories go when we grow old? Dan’s father says the worst thing about being 88 is that “my memory is shot.”

Yesterday we spent the afternoon with Dan’s  parents. Did some grocery shopping for them at the Safeway where Gabby Giffords and  12 others were gunned down nearly two years ago. Put a damper on the new year but today that experience has whooshed by. Just like 2012. Just like the past 40 or 50 years.

Here’s how 2012 flew by: My hair turns back to gray with purple streaks, Brook and Gian become engaged, Ethan moves forward in the second year of his Ph.D. program at Rice,  Dan loses weight while I seem to take on his lost pounds — same goes for cholesterol, I’m inspired by my 101-year-old friend Brownie, I become pen pals with Noam Chomsky, Brook and Gian arrive for a lovely visit and her gig promoting “Paradise Lust: Searching for the Garden of Eden” (NYT Book Review Editor’s Choice twice) at the March Tucson Festival of Books,  Julie and I continue our inspiring walktalks 2-3 times a week in El Encanto hood.

The beauty of Mt. Desert Island never ceases to amaze — this year it’s the Rockefeller Gardens. Besides having Brook and Gian at our house for a week and having a yummy engagement dinner at Fiddler’s Green, I visit with 40 friends. No visit with my dear friend Ashley Bryan on Islesford this year but I’m lucky to find the best winter renter, a scientist who relocated from San Diego.

Back to Tucson in August — I’m happy to receive a Poets & Writers magazine grant to conduct writing workshops at Our Place Clubhouse/Cafe 54. It’s all about creating a chapbook to help reduce the stigma of mental illness. We end up in a Tucson Weekly feature story — thanks to Mari Herraras — and on KVOA TV. With more to come…

Dan and I start checking out ethnic restaurants around Tucson with our fine-dining friends Bruce and Judy, from Cafe D’esta to Caruso’s to Kimchi Time (probably our favorite).

Began collecting Social Security! It’s the best! Going to a financial advisor who lives in Tucson but was recommended by Maine friends is also a step forward monetarily.

Over-the-top obsessed with the presidential election. No kidding. I kept pressing the “donate $3” button for a total of nearly $200. Anything to keep clueless Mitt Romney out of the White House. If only we could get the do-nothing Republicans out of the House.

Favorite books read: “Wild” by cheryl Strayed, “When We Were the Kennedys” by Monica Wood, “Elsewhere” by Richard Russo, “The Son” by Lois Lowry, “Orange is the New Black” by Piper Kerman, “Truth & Beauty” by Ann Patchett, “Incognito: The Secret Lives of the Brain” by David Eagleman. I like true stuff.