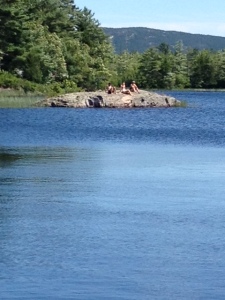 Somes Pond — named after the first settler of the village of Somesville on Mount Desert Island — has the most velvety water for cooling off on a hot day. It was 93 degrees here on Saturday. Downtown Southwest Harbor (due south of Somesville) looked like the storm of the century had hit. I saw one person walking around with an ice cream cone, checking out the dozen or so shops on Main Street. Otherwise the street was deserted.

There was no question where to go for a refreshing swim when my friend Martha called.   “Meet you there in 20 minutes,” I said. And we did. Grown-ups floating on rubber rafts and with foam noodles, kids with all sorts of water-play stuff, were splashing around close to the shore.

We swam off to the giant rock about 100 yards from the edge of the water. Martha and I are known for mischievous behavior, such as — ok, I’ll admit it — dunking ourselves in the Southwest Harbor town reservoir way before Mile Rock, which is permitted.

We’re women over 60, what can I say. On Saturday we were gliding along, delighted to cool off on such an unusually sticky day, giggling about how we were both wearing our old Keens. No stepping on jagged rocks for us, or worse yet, having our feet come into contact with an eel, leech or giant snapping turtle (Martha swore that happened to somebody she knew, But I didn’t believe her.)

Our silliness continued. About halfway to the rock, swimming toward us was a guy with a paperback book held in one hand. Astonishingly, the book was dry. The swimmer/reader alternated between reading his book and swimming with his head in the water, the book held high above him. Kind of like a submarine not fully submerged.

I had to know what he was reading. “Homeland,” by R.A. Salvatore, he told us.

“Must be a really good book,” said Martha. “Helps to pass the time,” he replied, swimming by with his book held high, smiling at us. What could two voracious readers do but smile back? And keep swimming.

4 Responses to Literacy above water!