Historic statues and landmarks may beckon some. Usually not me, but visiting family in Minneapolis a few weeks back I had to see it: Chicago Avenue where one George Floyd was put to death for being Black. His life kneed out by a white cop.

That part of Chicago Avenue was blocked off by the City of Minneapolis as a memorial, although the police kept trying to reopen the street, or so I was told by a few activists handing out water to “tourists.” The Minneapolis City Council has jurisdiction over the police and the two are at loggerheads.

Hanging out in front of the convenience store on the corner were two young men smoking cigarettes, observing the scene as they’ve probably done for years. When this man George Floyd lived and breathed like the rest of us.

Two Black men, one old and one young, stood in the middle of the street arguing.

“What makes you think you can take over a street?” the older one raised his voice, gripping his perfect Siberian Husky’s leash.

“You haven’t answered my question,” the retired cop, or perhaps a professor, said. “If you’re oppressed does that allow you to take over a city street?” The two men went on like that the whole time we were there. As a former reporter I wanted to interview them, but my former journalist son urged me not to interfere. 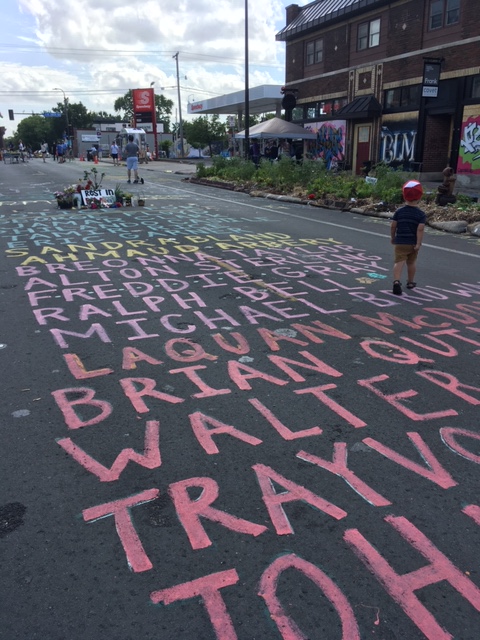 My 3 1/2 year-old grandson walking around the makeshift memorial. Yes, he wanted to know what it was all about.

The Minneapolis City Council voted unanimously to “end policing as we know it.” According to this Aug. 8 New Yorker story we know that Black Lives Matter has shifted public opinion more quickly than any activist organization in the last fifty years.

I like to think that protecting all human life matters more to Americans than spewing hate, that as Democratic presidential nominee Joe Biden said in his acceptance speech, we’re poised to move from “this season of darkness.” Let’s hope so. We’ll soon find out.