Destroying public education is one of their foremost goals. They thought Arizona would be an easy mark.

The state — hanging by a thread at the bottom of per capita student funding and teacher salaries — so why not? The governor and Republican Legislature have gotten away with stealing funds designated for education since 2008.

What did Ducey and the Republican legislature do with that money? You may ask, especially since the Arizona Supreme Court directed the legislature to restore education funding.

Individual Tucson teachers broke it down at today’s “Red for ED” downtown Congress Street rally, which drew more than 3,000 people, following yesterday’s 75,000 in attendance at the Arizona State Capitol in Phoenix.

In Tucson, a retired Marana elementary school teacher told me her salary was higher in 2007-2008 than it was in 2015-2016. A former special education teacher at Robison Elementary started receiving pay cuts in 2008. In 2016, after seven years teaching, her salary rose to what newly hired teachers were making, $37,000. The Sunnyside High School art teacher said her annual supply budget is $400, with 35 to 40 kids in her classroom.

Who believes him, the liar who calls himself the “education governor?”

WE CALL BULLSHIT on Ducey, the anti-education Arizona legislature, and the Koch Brothers!

“Their cause, they say, is liberty. But by that they mean the insulation of private property rights from the reach of government — and the takeover of what was long public (schools, prisons, western lands, and much more) by corporations, a system that would radically reduce the freedom of the many.” —  footnote from The Triumph of Politics by David A. Stockman, in Democracy in Chains by Nancy MacLean.

Mass free public education stands as one of America’s greatest achievements. With thousands of educators taking to the streets — speaking the truth — let’s hope it will be again. 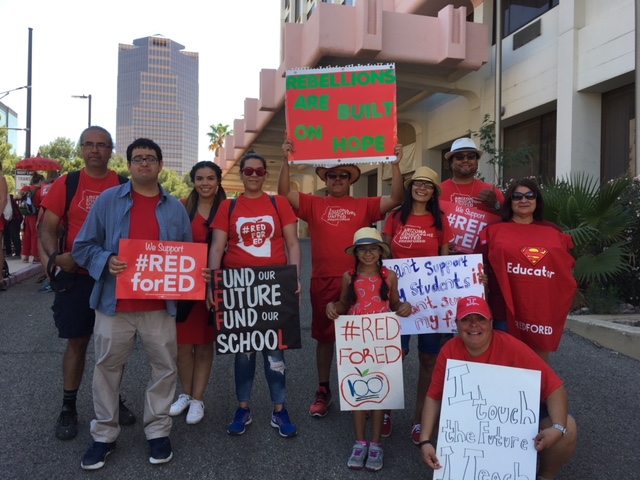