For the first time in years, I wish I were back in a high school classroom, working together with teenagers who are taking a stand against gun violence, understanding the heinous misinterpretation of the 2nd Amendment.

Here’s what I can’t fathom: Why do conservatives, often strict constructionists of the Constitution, believe that assault weapons of war should be allowed in present day America? (Yeah, thanks Obama, wasn’t he supposed to take away their guns? Never happened).

Why do we require licenses to drive, even to bake cookies for sale at farmers markets, but not for guns? 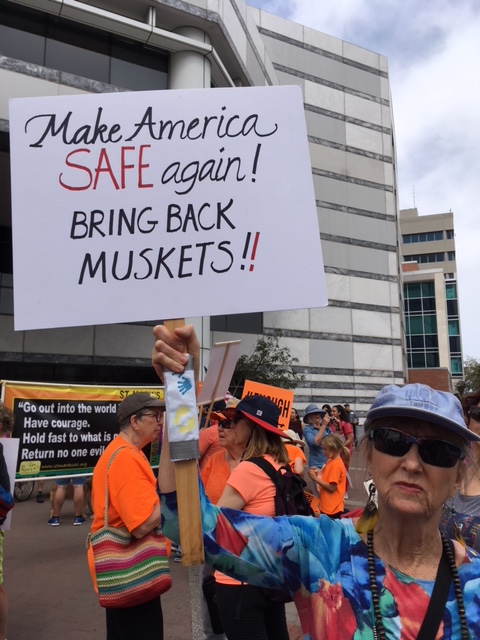 Around 8,000 people took part in Tucson’s “March for Our Lives” yesterday, starting at the Joel Valdez Main Library downtown,  marching to the University of Arizona campus. A day of hope. An emotional day.

Another day of hope 10 years ago…I was invited to a “Meet and Greet” for a young woman running for Congress, an Arizona state senator. I went. How inspiring to interact with such a smart, warm, down-to-earth and honest political candidate!

Gabrielle “Gabby” Giffords could have won the 2016 presidential election, that is, if a bullet hadn’t ripped through her brain in an attempted assassination on Jan. 8, 2011, in front of a Safeway grocery store.

When I see Gabby walking around our neighborhood, balancing her left side on a cane, I feel sad.  She responds to my “Hey Gabby” with a smile, and “How are you doing?”

Her interminable courage is contagious.

A now dear friend who was also shot on that horrendous day, Suzi Hileman held the hand of nine-year-old Christina-Taylor Green at the moment a bullet struck her, silencing an innocent girl forever. I can only imagine Christina’s potential for activism if she had lived to be a teenager. That day, she excitedly wanted to meet her Congresswoman.

Suzi was struck by bullets, too. She and I sometimes meet for breakfast, enjoying smashed avocado toast together. Suzi will forever walk with a limp, her life smashed by incomprehensible loss.

Wearing her orange “I am a survivor” shirt, here’s the sign she displayed yesterday on the UA campus.

When will this carnage stop? “Vote them Out,” a battlecry frequently heard yesterday, is a first step. Don’t vote for anyone who receives money from the NRA.

Our most competent leaders are teenagers.

The hope, the energy of being with like-minded people of all ages and backgrounds cannot be underestimated. 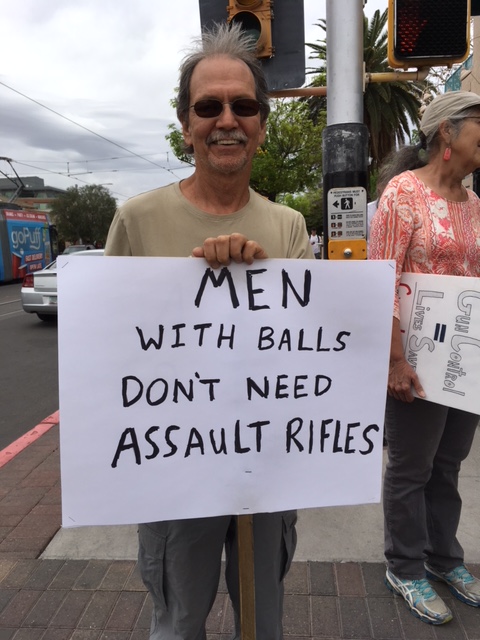 Last night we saw “A Brief History of Time,” a thought-provoking documentary about Stephen Hawking. Struck by his mother’s comments about Hawking’s ALS diagnosis at a young age, I realized that trauma can focus action.

Let’s hope that Gabby’s courage and the Parkland students’ activism will do more than inspire. Let’s Vote Out the do-nothing, no-good so-called leaders in our nation’s capitol, in our state houses and legislatures this November! 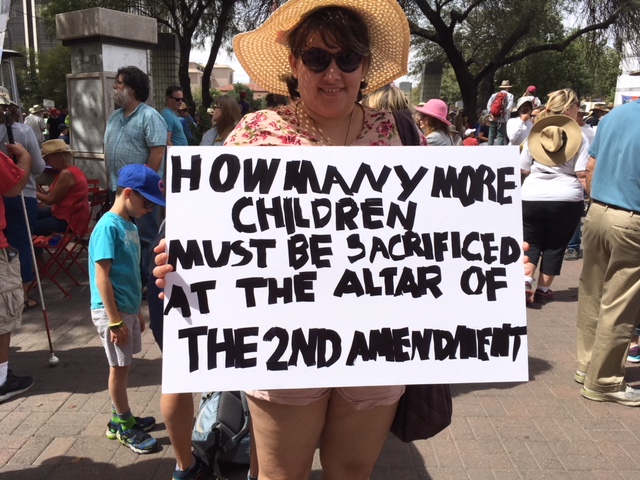 Like Loading...
This entry was posted in Bopping Around Tucson, Fight wimpiness, For Love of History, Politics and tagged 2nd Amendment, Christina-Taylor Green, Gabby Giffords, March for our Lives, No to the NRA, Parkland students, Stephen Hawking, Surviving trauma. Bookmark the permalink.

5 Responses to Protect kids, not guns!