What do Henry David Thoreau, a retired 85-year-old Maine pediatrician, a busy Tucson graphic artist and mother of a very busy three year old, an espresso-drinking theatre couple, and I have in common?

Walking. Up and down hills, mountains, along shore paths and urban nature trails, moving to make our brains and bodies work better, birthing new ideas — either in conversation or solo.

The magnificence of Mt. Desert Island

Yesterday I read “Walking,” a pamphlet by Henry David Thoreau. It was hot and humid in Central Maine where I’m visiting an old friend, and I walked my three miles before settling indoors.

“I think that I cannot preserve my health and spirits, unless I spend four hours a day at least — and it is commonly more than that — sauntering through the woods and over the hills and fields, absolutely free from all worldly engagements.” — Thoreau

I’m thinking about my Tucson walking pal who’s moving to the big city. I’m inspired by people at least 10 years older than I am who have taken up the walking habit for better health or because they ran marathons their entire lives and can’t stop.

Here, in this small Maine town, my author friend Margy Burns Knight encourages one and all to “play outdoors.” She taught us the basics of pickleball. We ate out at the Liberal Cup and Slates, two great restaurants in hip and historic Hallowell.

I hadn’t spent much time here before, and I’ve so enjoyed swimming — actually lolling about — in Central Maine’s velvet lakes. And we walked.

Today, especially, I’m thinking of an old friend whose dear 99-year-old father died yesterday. She’s the most consistent walker I know; for her walking has provided prayer, therapy, solace, and happiness.

This past week I’ve heard about a seeming onslaught of illnesses and mishaps: concussions, cancer, extreme fatigue for no apparent reason, heart attacks, Alzheimer’s, seizures. I and all my friends are getting old(er).

Still, walking uplifts me. Life is about living — moving — no matter what. 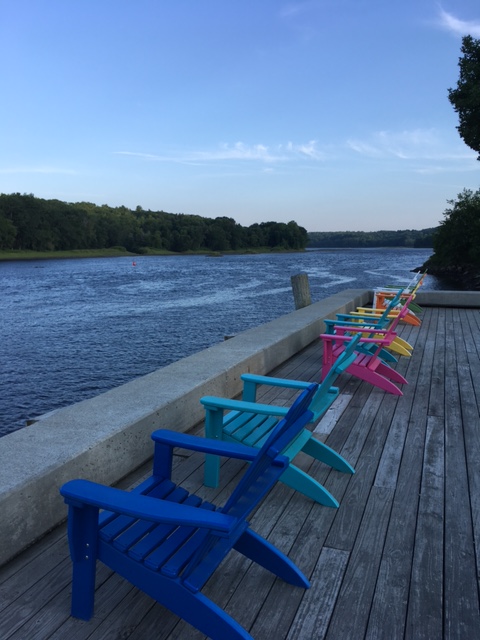 Resting by the Kennebec River in Hallowell, Maine