Sitting in my car, listening to Barack Obama (*please read to the end.)

I had meant to go grocery shopping. As NPR came on the radio, I heard Barack Obama’s eloquent voice, and a realization struck me: This could be his last news conference as president. I started taking notes on my shopping list. 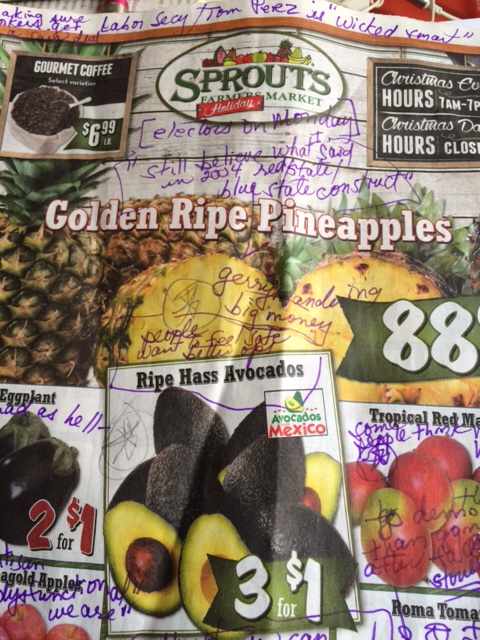 First up, a multi-part question about whether Russian hacking purposely secured dt’s election.

Vulnerability to the influence of foreign powers on our elections is directly related to how well our political system works, how dysfunctional it is, our real president said. Gerrymandering and Citizens United have taken their toll on fair elections. According to a poll of Republicans (party  policy has been staunchly anti-Russian), “thirty-seven percent of Republicans approve of [Russian President Vladimir] Putin. Ronald Reagan would roll over in his grave,” said Obama.

“I still believe what I said in 2004, that red state/blue state [dichotomies] are a construct,”  the then unknown Illinois state senator affirmed at the Democratic National Convention in Boston. I covered that convention and was lucky enough to hear Obama’s electrifying keynote.

The most decent, brilliant president of my lifetime sounded frustrated at his Friday press conference. “Do Republicans dislike Democrats so much?” he asked.

It seems that they do, enough to follow you-know-who into democratic oblivion.

Obama has always upheld the sensibilities of the American people, as have I. Who ever imagined so many people voting for such an incompetent, hateful candidate?

I’m sure our president will strive to make a difference as a private citizen: “How can we channel the decency of the American people” back into our politics?

Like so many others, I’ve been heartsick  and depressed about this election. I feel guilty about having so much good in my life, compared to more vulnerable Americans who stand to lose their newly acquired health insurance, for starters.

UC Berkeley Professor George Lakoff warns us about listening to Trump. Why give credence to such an enormous blight on our history?

Talking to my dear daughter yesterday, I made a decision. Posting dt’s photos or reading about his outrageous lies and childish distractions will only make me sick. I’ll march in Tucson on Jan. 21. I will speak out to government officials, but I will only read or post about those decent Americans who help us uphold democracy. *Please hold me to it.

3 Responses to Sitting in my car, listening to Barack Obama (*please read to the end.)