My next bumper sticker?

My boring 1999 beige Toyota Corolla needed a bumper sticker to help me find it. I saw my car everywhere in Tucson. When I bought it 10 years ago, I was already old enough to have trouble remembering where I parked it.

“Well-behaved women seldom make history” was the first. It wasn’t enough. I’m not sure which bumper sticker came next, maybe those extolling our prez — We love you Barack, I heart Obamacare. Ot it may have been “Stop listening to Fox News.” 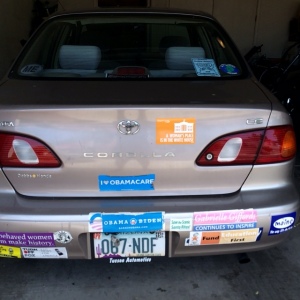 See what I mean.

Here’s the question: Will I get a Hillary for President bumper sticker?

“I don’t care if she deleted every email she ever wrote,” I said last night when we were out with friends. “I want to see a [Democratic] woman president in my lifetime.”

M and R agreed that Hillary will be nominated and will have a good chance of winning. D thought too many people already hate her.

Maybe they just hate the idea of a woman president, like the right-wingnuts who hate Obama because he’s black.

I agree with M, who pointed out that we have a low voter turnout, especially in mid-term elections.

Common-sense, decent, quiet people will vote for Hillary Rodham Clinton in 2016. She’s smart, she’s tough and she cares about the plight of girls and women. What other politician running for president does?

Not the right-wingnuts. We have our fair share in Arizona. Gov. Doug Ducey, who was elected in the last mid-term election, just signed a bill stating that abortion could be reversed. Whaaaaa?

Beauty is required to cheer me up after thinking about this outrageous stupidity — and condescension toward women.

I’ll vote for Hillary. Will I trust her? Not completely. But consider the alternative.

Do I have enough room for another bumper sticker? I’m not sure.