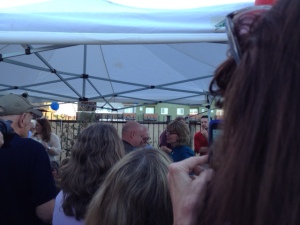 Mark Kelly and Gabby Giffords groovin’ to the music

Gabby looked tired. She looked sad although she smiled and subjected herself to hundreds of people taking pictures. She was born to run. U.S. Rep. Ron Barber, who won a special election to take her place in the House, noted that Gabby’s always had a secret passion to be a DJ., which she did at today’s “Get Out the Vote” bash/concert at Tucson’s historic, funky Hotel Congress. “Born to Run” by Bruce Springsteen was the first song she played.

Gabby’s lucky to be alive with her cognitive abilities intact after a bullet smashed through her brain nearly two years ago. I’m always happy to see her and to walk by her home a few blocks away.

Yet if must be tough for her to hear Ron Barber talking about his current campaign to win a full term in Congress and to listen to Dr. Richard Carmona, who’s running for a U.S. Senate seat that could have been Gabby’s.

People around me were teary-eyed as Carmona, the former surgeon general under W., related how he came to his decision to run for the Senate, when his instinct was to get far away from Washington. “I was inspired by a committed leader who worked tirelessly for Southern Arizona,” he said.  Of course that was Gabby. “She would call me her opening act” whenever he campaigned with her.

A woman stood next to me wore an “Old White Women for Obama” button. Guess that’s me too. I have to say, I’m a little sad watching young women — who look no more than 20 — running around today as a chief of staff or campaign director. A job I wanted fresh out of college, as a political science major/political junkie. I stumped the halls of Congress trying to land such a job but back then I was only asked if I could type. I tried again after working in the 1972 McGovern campaign.